A couple unflinching love for vegetables reaps in rich dividents 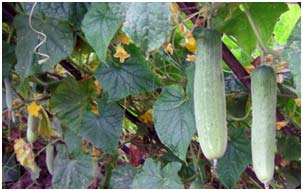 Here is a story of Mr & Mrs. Bendangnukshi, a couple from Aliba village in Mokokchung District which started in their own kitchen garden. The couple started growing vegetables for their consumption in the kitchen garden from where their interest aroused for vegetable cultivation. In 2014 with the assistance and support of the Department, they set out on a commercial venture of cultivating the seasonal vegetables in their 1 ha ancestral land which paid off in rich dividends. Producing vegetables like cabbage, broccoli, cauliflower, knol-khol, peas, turnip, radish, potatoes and coriander during the winter season earns them Rs. 2.7 Lakhs and during summer, they earn around 1.8 Lakhs by producing vegetables like ladies finger, pumpkin, chilly, beans, ginger, and off- season cucumber during the summer season, thus, earning Rs. 4.5 Lakhs annually. Their venture has helped in not only sustaining their family but also in achieving surplus production to fulfill the market demands.

Their love for vegetable cultivation has earned them, accolades and laurels throughout the State, significant of which are:

The story of their dedication and love for vegetables is an exemplary story, which will certainly serve as an encouragement and motivation for all the farmers of the State.