Floriculture Sector in Nagaland – Taking the World by storm 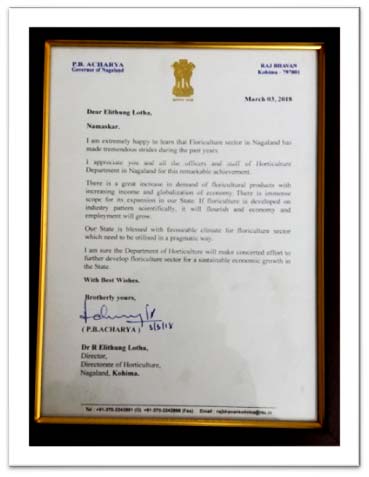 Floriculture is one of the fastest growing sectors in the Horticulture Sector of the State and the success of this sector is mainly attributed to the large scale participation of the Women. The State produces Roses, Anthuriums, Liliums, Orchids etc of one of the finest qualities due to which there is a huge demand in the market both within and outside the State as is evident by the mushrooming a number of florist shops in almost every nook and corner of the State.

Commercial floriculture in the Nagaland received attention very late in comparison to other States. It was just a Housewife’s activity in the confines of their homes up till 2005, when the Department of Horticulture through the support of the Ministry of Agriculture & Farmers Welfare, Government of India introduced commercial floriculture through the Mission for Integrated Development of Horticulture Scheme. It is a matter of great pride for the Department that today there are over 1000 flower growers in the State under the Department who have conglomerated under the aegis of Flower Growers Society and have strived forward to blossom into successful entrepreneurs which is a matter of pride for the State.

Today, it is matter of great satisfaction that the flower growers especially the women in the State are able to support their families through floriculture avenues. Thus, the future of Floriculture in the State seems rosy and may well be the Sunrise Industry of the State which needs to be tapped to its full potential for providing employment, generating revenue and income for the Womenfolk of the State which will give an opportunity for the Women to work and earn an income so that, her position within the household changes.