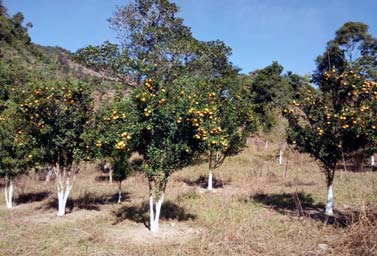 “In dreams begins reality” given by the famous poet, W.B. Yeats is a quote Mr. Honlei from Shiyong Village, Mon lives by. He began dreaming of an orchard laden with oranges and worked towards turning it into a reality in the year 2005, when he planted 800 orange saplings and was the first in his village to do so. The initial journey was not without hurdles and he had to face a lot of criticisms from his villagers who thought it was a waste of time. Undeterred, Mr. Honlei continued to toil hard and expanded his orange orchard with the assistance of the Department of Horticulture. Today, Mr. Honlei is a source of inspiration for the same people who once criticized him and he provides employment to the local youths in his orchard. He is the proud owner of 10000 nos of orange trees and earns upto Rs. 7-8 Lakhs per annum by the sale of his oranges to different buyers from the State and neighboring Assam.

Mr. Honlei’s dream turned into a reality and today the Shiyong Village is famous for its orange orchard and the villagers also celebrate the “Orange Festival” every year in the Month of December to mark the value of the crop in the economic life of the villagers, to which one cannot help but say that “The Dream was worth dreaming about”.