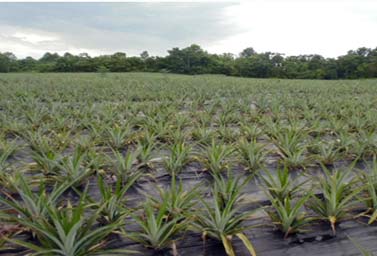 The use of plastic mulching in horticultural crops has been gaining momentum in the recent years and has proven to be very practical and successful. Keeping this in mind in the year 2016-17, the DHO Dimapur identified Mr. Letthang Misao, a progressive Pineapple grower of Molvom Village to grow pineapple using 50 micron UV stabilized plastic mulch in 1Ha of his farm. After following all the necessary package of practices, he was convinced that by using plastic mulching, there was a significant improvement in the production and productivity of his crop.

There was uniformity in the size of the fruits with average weight of more than 1.5 Kg. There was also some improvement in the T.S.S value even in the winter harvest. Even though his initial cost was higher, the expenditure in cultural practices in the subsequent season was reduced by ten times. It also shortened the flower initiation period from 15 months to 10 months. During 2016-17, the yield from the mulched plot was about 60 MT/Ha/year earning him revenue of about Rs. 6 lakhs compared to his other fields which recorded a yield of only about 40 MT/Ha/year giving him a turnover of only 4 lakhs. Given the fact that, plastic mulch has a life span of about 5 years, the cost of production is expected to decrease in the coming years while production and productivity would be improved.

Plastic Mulch thus, may well be the answer where the future of pineapple cultivation lies and which may help achieve the goal of doubling the farmers’ income by 2022.